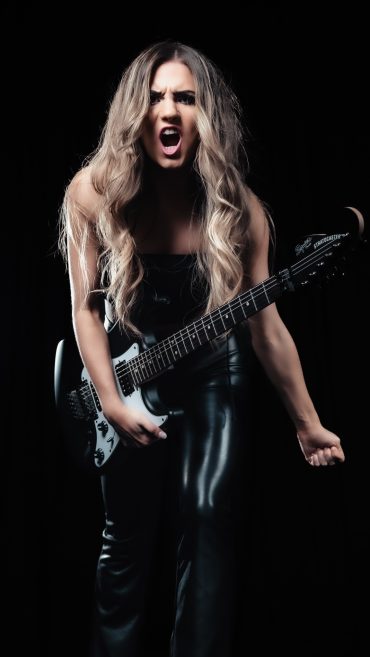 Australian teenage rock chick Cassidy Paris has started 2022 with a bang! With a sold out EP Launch for her latest ep FLIRT and multiple live shows all over her home town of Melbourne, Cassidy has also announced dates for her first ever tour of the United Kingdom in November 2022.

Cassidy's ep features the rock and edgy pop anthem, Wannabe (her 7th single at just 19yo), which sees Cassidy delivering a song based on personal experience about society’s obsession with popularity.

"It focuses on the obsession today’s youth has on popularity and how they are willing to sacrifice their friendships and integrity. The youth of today are not able to be original. They all want to be TikTok or YouTube stars. I have never really understood how people can fake friendships. Talentless people are trying to become famous for doing nothing at all”. Yet it was a pattern that was becoming all too familiar, Cassidy explains about the inspiration behind the song. “This song is how people fall into the pattern of becoming followers and focussed on materialistic possessions and fame”.

The latest single follows on from ‘Like I Never Loved You’ released in 2020 to rave reviews worldwide.

Raised on classic hard rock and inspired by female rockers such as Lzzy Hale, Joan Jett, Pink, Pat Benatar & Avril Lavigne, the fiercely determined teenager is on a mission to inspire a new generation of younger fans to not only listen to Rock ‘n’ Roll, but pick up a guitar instead of a phone.

At the age of 11, Cassidy met singer songwriter Paul Laine (ex Danger Danger, The Defiants), who developed a unique mentoring role. Paul took Cassidy under his wing to help develop Cassidy as an artist and songwriter, collaborating with her in songwriting and producing her music.

From early on, Cassidy has wanted to deliver a strong message through her music. In 2018, she released Stand, a heartfelt song about ‘standing up for yourself’ as a young woman. Cassidy continues to deliver that message, promoting anti-bullying through performances at many schools around Melbourne, Australia and is an active campaigner for the worldwide ‘Metalheads Against Bullying’ organisation.

Cassidy has built up a strong connection with her growing worldwide fanbase that has already seen her perform in America and Japan. She was also invited twice onto the line-up of the New Wave of Classic Rock WebFest.

Her talents have not gone unnoticed by one of the major guitar giants Fender, lending their support by joining forces with Cassidy to bring her on as an endorsee of Fender Squier Guitars.

Further to this, Cassidy has been acknowledged as a semi-finalist for her song writing efforts in the International Songwritng Competition (ISC) for Best Rock Song and Best Unsigned Artist.

Cassidy has joined forces with the team at Direction who amongst them have worked with the likes of Bad Company, Pat Benatar, The Go-Gos, The Sweet and Heaven & Earth. Their skills in working at EMI USA and A&M Records will no doubt foster some great opportunities.

Cassidy Paris = the next generation of ROCK.

Cassidy Paris is exclusively managed and booked by The Silverback Agency in Asia Pacific and the USA/Canada.